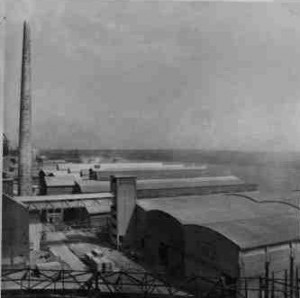 We are one of the most dynamic developing producers operating in the market of agricultural and horticultural fertilizers. The roots of the company date back to the nineteenth century when, thanks to research on plant nutrition conducted by Justus von Liebig, chemical compounds that may help farmers increase productivity began to catch interest.

There were several chemical plants including “Union”, Fabrik Chemischer Produkte established in 1872 as a joint stock company. The location for a new factory was chosen perfectly – it was founded on the banks of the Oder River, next to the railway station.

In 1945 the factory was severely damaged in a result of Allied air raids. Its reconstruction was taken already in August 1946. The formal transfer of assets under administration of the State Superphosphate Factory in Szczecin specially created for this purpose took place on 23 November 1946.

In 1949 the name of the factory was changed to the Phosphoric Industry Plant in Szczecin, then to the Pomeranian Phosphoric Industry Plant as a state enterprise identified in Szczecin. On the basis of a decision of the Minister of Heavy Industry as of 18 August 1949 the enterprise “Union”, Fabrik Chemischer Produkte that was at that time under state administration was taken over into state ownership.

Starting own production of sulfuric acid in April 1949 began a period of continuous and stable operation. The year 1951 brought another change of name, this time into the Szczecin Phosphate Fertilizer Plant in Szczecin. It turned out to be the longest binding name in the company’s post-war history.

In addition to the core product, which was a simple granular superphosphate, also micro-enriched fertilizers were produced. In 1973 the history of the “Fructus” brand of horticultural fertilizers began. 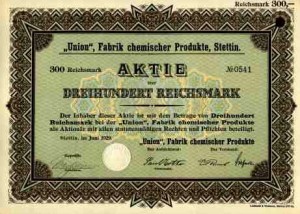 The turning point in post-war history of the factory and the key moment was the technical reconstruction made in the years 1974-1977. The change of the economic system in 1989-1990 appeared to be a serious challenge. A decline in demand for fertilizers, elimination of the existing central distribution system and the need to create its own sales network caused that the plant faced new tasks. Taking into account the new realities and requirements of the market, a lot of adjusting activities were undertaken, which helped to survive and maintain the essential level of employment of the crew. Uncertain conditions of business activity forced enterprises to seek other sources of income. One of means of diversification of their services turned out to be provision of services based on their own port quays and own infrastructure. The years 1998-2005 brought formal, legal and ownership changes in the company.

Do you know more? Help us preserve Fosfan’s history.

Share your sources. Send us photos, documents and memories to: historia@fosfan.pl

This website uses cookies to improve your experience while you navigate through the website. Out of these, the cookies that are categorized as necessary are stored on your browser as they are essential for the working of basic functionalities of the website. We also use third-party cookies that help us analyze and understand how you use this website. These cookies will be stored in your browser only with your consent. You also have the option to opt-out of these cookies. But opting out of some of these cookies may affect your browsing experience.
Necessary Always Enabled
Necessary cookies are absolutely essential for the website to function properly. This category only includes cookies that ensures basic functionalities and security features of the website. These cookies do not store any personal information.
Non-necessary
Any cookies that may not be particularly necessary for the website to function and is used specifically to collect user personal data via analytics, ads, other embedded contents are termed as non-necessary cookies. It is mandatory to procure user consent prior to running these cookies on your website.
SAVE & ACCEPT